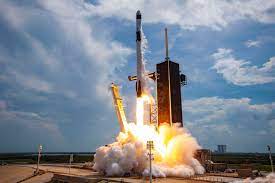 While you are still waiting for space travel to become affordable to the common man, SpaceX’s CEO Elon Musk is planning to prepare a breakfast in space.

Well, if not breakfast then what else are avocados and shrimps doing aboard the International Space Station?

Read further to know what avocados, shrimp, and a robotic arm are doing into space as we tell you all about SpaceX’s recent launch. Why is Elon Musk sending food to space?

The new shipment that includes various food items like ice cream, avocados, shrimp etc is part of the shipment of food for the seven astronauts at the International Space Station. The astronauts are working on a project to solve the problem of growing food in space. This shipment will help them in this endeavour.

The shipment was carried on a capsule called Dragon. According to the Associated Press, this is SpaceX’s 23rd supply launch for NASA.

What’s the experiment all about?

The astronauts aboard the ISS include  Mark Vande Hei, Megan McArthur, and Shane Kimbrough from the US; Oleg Novitskiy and Pyotr Dubrov from Russia; Akihiko Hoshide from Japan; and Thomas Pesquet from France.

Vande Hei, Novitskiy, and Dubrov have spent 143 days in space, while McArthur, Kimbrough, Pesquet, and Hoshide have been there for 129 days.

The Girl Scouts have sent ants, brine shrimp, and seedlings for the experiment.

The astronauts are planning to use the ants to study the tunnelling behaviour of insects in space. They have designed another experiment in which they will study how tomatoes and other plants grow in a weightless environment. They will use the Brine Shrimp to study whether crustaceans could survive in space to provide fresh proteins to the astronauts.

What will the robotic arm do?

Gitai, a Japanese startup group has given the robotic arm to the astronauts. It will help them in doing menial tasks and repairs.

Toyotoka Kozuki, the Chief Technological Officer of Gitai expresses that in the future, robotic models will be able to move independently in outer space. These models are pretty useful as they can help in repairing satellites, mining minerals from the moon, and building lunar bases.

The shipment left earth on Sunday and arrived at the International Space Station on Monday.

What exactly is SpaceX?

It was founded by Elon Musk in 2002 with the vision of making space travel less expensive that will eventually help in the colonisation of Mars.

SpaceX has revolutionised the space industry. It became the first private company to send a spacecraft to the International Space Station.

One of the main reasons why SpaceX is seen as the most promising and revolutionary company is because it sends rockets to space at two-thirds costs.

Elon Musk, the founder of SpaceX is heralded as no less than a tech messiah by a lot of people. He is praised for his revolutionary ideas, his intellectual ability and his work ethic. But what’s the need for all these launches?

You might be wondering why we are giving so much attention to space launches?

What’s so special about them that governments all over the world are ready to spend so much money on rocket launches?

After all,only  a handful of people are able to visit these places.

Apart from the wonder element, space exploration has a lot of practical benefits too. We can thank space experiments for giving us scratch resistant glass, smoke detectors, and air purification systems.

Scientists are able to conduct a lot of experiments in space that they can’t conduct on the earth. Simply because of the lack of availability of that kind of physical conditions on the earth.

These launches and space exploration in general help us to understand our neighbouring planets in a better way. They satisfy our thirst for knowledge.

The space is full of mysteries and humans are unravelling them one at a time.

Tell us in the comment section what are your thoughts on SpaceX!